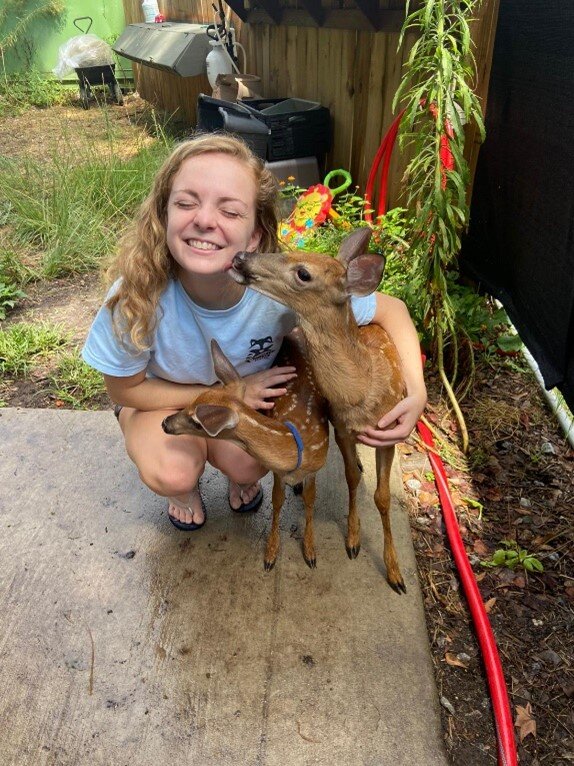 Wildlife rehabilitation is the caring of individual wild animals until they can be released back into the wild, but it can take a lot of time, work, and energy. So why put in this much effort into providing care for sick or injured animals? Working as an intern for the Savannah Wildlife Rescue Center located in Savannah, Georgia, I have learned many of the reasons why wildlife rehabilitation is so important and worthwhile.  Last summer and fall I spent five months caring for orphaned squirrels, possums, raccoons, deer, otter, and the occasional bird. Care involved bottle feeding, cage cleaning, vaccine administration, and making sure the animals were healthy. In the summer, I worked at the clinic almost every day, and the work could get exhausting. The tasks were repetitive at times: feed, clean, repeat, and the exact same routine the next day. And sometimes, all the hard work we were putting into the animals, was not enough. Last season, our clinic felt the effects of a disease called feline parvovirus, which is deadly to raccoons as well. Feline parvo causes feline panleukopenia, which is highly contagious and affects the digestive and immune systems of the animal it infects. With a weakened immune system, infected animals are also more susceptible to other viruses and bacteria. The virus entered the clinic through an infected raccoon and rapidly took the lives of many babies too young to fight off the effects of the virus. Once the clinic became aware of this virus, we were able to begin vaccinations on our raccoons as well as warn the local public about the virus that was potentially affecting the local pet community. Though it was hard to see so many animals die, we had animals constantly entering the clinic that still needed our care. Towards the end of the season, I was invited to go on a raccoon release where we put 15 raccoons back into the wild. It was so worthwhile to know that our hard work had at least paid off for these individuals. They will continue to play their role in their ecosystems and food webs. I will be continuing the same internship this year and have been invited on as a team leader to share my knowledge with new interns volunteers that come in.