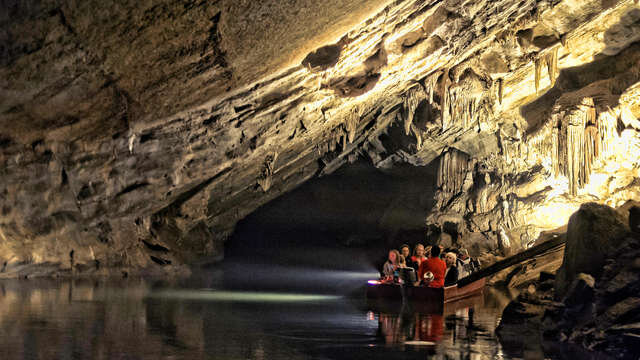 This past summer, I interned at Penn’s Cave and Wildlife Park as a cavern guide. I drove a boat throughout the underground river system and educated the public on the geology and biodiversity of the cave and the wildlife park. Although mostly devoid of life, we referred to the cave itself as “alive” and “growing” as the stalactites and stalagmites that were formed millions of years ago continued to inch their way throughout the cavern.

As a guide, I explained to the guests how the cave was formed and the different minerals that make up the rocks and formations such as limestone, iron oxide, calcium carbonate, and iron sulfide, also known as fool’s gold. Even though the cave is not the most fertile place for life to thrive, we still found some creatures that would use the cave for shelter such as bats and even a beaver. The water in the cave then emptied out onto a man-made lake which was personally my favorite part of the tour. Rounding a large rock pile in the middle, we were treated to various different views of the large pastures that housed the elk and white-tailed deer. I also saw a family of ducklings grow up over the summer I spent at the park. They would often sit at the edge of the grass islands and watch as the boat passed by. Sometimes they would swim next to us as we wandered about the lake.

One of my favorite visitors was the pair of bald eagles that live at the park. I had never seen America’s national bird until I started working at the park. One day, I rounded the boat around the central island to turn back into the cave, and an eagle swooped down next to us, snatched a water snake in its talons, and flew off into the neighboring trees. It was one of the most incredible sights I had ever witnessed. Even though I was working at a park and animal attraction facility, I felt in that moment that I was in their world, not the other way around. I’ve always felt a connection to nature, but working at this job introduced me to new sides of the environment that I would have never seen before. It also instilled in me a greater appreciation for the nature that surrounds me every day.

All of the animals in the wildlife park, such as brown bears, foxes, wolves, and mountain lions, are native to North America. When most people think of seeing animals at a zoo or wildlife park, they think of the exotic, rare animals that live halfway across the planet. If you asked almost any native Pennsylvanian, they would probably not be so keen on paying to go see a white-tailed deer, an animal often regarded as a pest that eats our flowers and crashes our cars. However, seeing these animals roam across acres and acres of land, unimpeded by pollution or the headlights of an oncoming car, was a very eye-opening experience for me. Even though this was a man-made park, it was closer to a natural environment for these animals than I had ever seen. I thought I had seen a deer before, but I realized while working at Penn’s Cave that I had never taken the time to really see them. I realized how caught up I could get in wanting to appreciate the elephants or the giraffes without recognizing the groundhogs and the turtles that lived in my backyard.

Celebrating local biodiversity was a major emphasis in my tours, and I loved getting to not only experience these wonders myself, but to share the importance of them with others.